The word “jelly” has a French origin – so the culinary people called frozen fruit from fruit syrup or juice, sugar and gelatin.

It is useful for jelly, mainly thanks to the necessary gelatin for its preparation. It contains 18 amino acids, including glycine, hydroxyproline, alanine, proline, glutamine and aspartic. They are one of the best sources of energy for the muscles, central nervous system and brain, promote the normalization and acceleration of metabolism and increase mental capacity, strengthen the heart muscle. Also, gelatin is necessary for the body due to the presence in it of a large number of animal proteins and collagen, which contributes to the restoration of connective tissues: cartilage, bones.

In recent years, instead of gelatin, when cooking jelly, more often use agar-agar and pectin. Each of these thickeners is much more useful than gelatin.

Agar-agar is a substitute for gelatin, vegetable origin. It is a gelling agent, which consists of a mixture of polysaccharides of agaropectin and agarose. It is obtained from red and brown seaweed growing in the Pacific Ocean and the White Sea.
Agar-agar in large quantities contains iodine, calcium, potassium, iron, other valuable substances, trace elements and oligoelements, including folic acid and magnesium. Dishes with agar-agar are recommended for those who want to lose weight. There are absolutely no calories in it, because it is simply not absorbed by the human body. Agar-agar has a mild laxative effect. Getting into the intestine, it increases in volume and thus stimulates its peristalsis. At the same time, due to the high content of coarse fiber, it produces mechanical cleaning of the intestines, absorbs harmful toxins and toxins from the body. It cleanses the liver, removing harmful substances from it and improving its work.

Pectin, thanks to its plant origin, is ideal for any fruit dessert. Its most useful property is the ability to bind and then remove from the human body radionuclides and salts of heavy metals, such as lead, that are harmful to it. It is especially useful for people working in industries with harmful working conditions. Getting into the intestines, like agar-agar, pectin adsorbs toxins that enter into it with food or are formed during digestion. Often dishes based on pectin are included in the menu of people suffering from metabolic disorders, obesity, diabetes mellitus. It normalizes the liver and kidneys, removes excess cholesterol, reduces the risk of atherosclerosis, cholelithiasis. 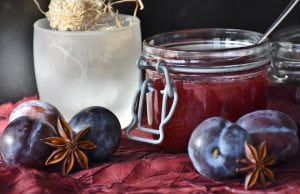 Jelly is also useful because, being cooked on the basis of natural ingredients, it retains most of the vitamins and minerals contained in them.
Among other things, it is also actively used for cosmetic purposes, because the substances contained in it have a favorable effect on the condition of nails, hair and skin.

The Harm of Jelly

Harmful jelly can only be if it is made from low-quality products. Therefore, if you are making jelly from mixtures sold in stores, before buying, carefully familiarize yourself with the composition of the product. Also, the benefit and harm of jelly depends directly on the amount in which it is consumed. For example, fruit jelly – useful, tasty, low-calorie, but all such a sweet enough delicacy, which means that you do not need to eat it daily.

What conclusions can be drawn from all the above? Jelly is certainly a very useful product, if the technology of its preparation is observed, if all components are natural and, of course, if this dish is not used in excessive quantities.

Protein Food That Should Be In Your Ration

Foods that Should Avoid if You Want to Lose Weight